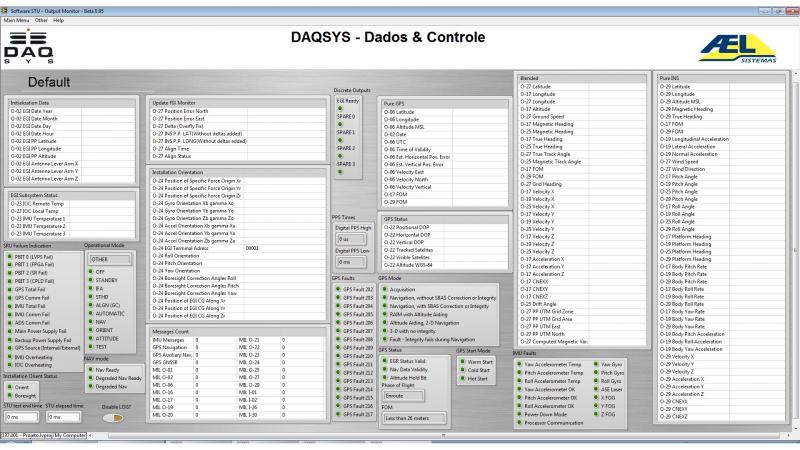 Develop a system for carrying out tests on a “Inertial Navigation System for Aircraft” (INS), using the hardware and software technology from National Instruments. The system must be deterministic in time with processing and storage of data, modular and flexible aiming adaptations and new implementations.

Using an architecture consisting of a PXI and a PC dedicated to the user interface, as well as PXI boards for standard aviation bus communication and multiple other I/O. PXI, operating in RealTime mode, is responsible for all processing and storage of data. On the PC, it has all the user interface (HMI) and is responsible for all configuration and system monitoring. The development of software for the entire system is the LabVIEW programming and their tools.

AEL SYSTEMS S.A. is a Brazilian company located in Porto Alegre (RS), which develops and produces technological solutions for the areas of defense, space, security and logistics. The company is a supplier of avionics for aircraft of the Brazilian Air Force (FAB) and still has as customers Embraer, Helibras, INPE among others. With the support of FINEP, AEL is developing the EGI – the first Brazilian inertial sensor location for aerial platforms. This system consists of inertial navigation (INS) and global positioning satellite (GPS), which perform all aid tasks to navigation, informing the position, velocity, attitude (curvature and slope), linear acceleration and angular, angular rates aircraft and temporal data (date / time) for the mission processor.

In its final application, the EGI interconnects networks used in aviation, which includes all the sensing and other equipment of an aircraft, both for commercial use and for military. The IMS allows obtaining a stabilized reference plane from gyros and accelerometers, may determine the movement in three axes.

To the solution developed by DAQSYS, it was adopted PXI platform. A hybrid PXI chassis / PXIexpress eight slots was chosen for the system, because that would require boards of both types. Due to the necessity that there is a time determinism of the system, that is, different data from different devices, emulated or not, are synchronized to the same time base, the DAQSYS opted to use a real-time system (RT) installed in the controller PXI. The large amount of traveling RAW data during simulations, with readings and storage on disk, in addition to the conversions in real time to the user interface, a controller with I7 processor with large processing capacity and memory was used. To interface with the system operator, we used a PC with Windows 7, connected point to point to PXI for an Ethernet Gigabit.

Regarding communication between devices were installed in PXI boards for MIL-STD-1553 and ARINC 429, both supplied by National Instruments for aeronautical, military and aerospace applications, through collaboration Avionics Interface Technologies (AIT), a provider leading avionics instruments. MIL-STD-1553 is a military standard published by the US Department of Defense that defines the mechanical, electrical and functional characteristics of a serial data bus used to provide a means for the exchange of data and information between the various systems an aircraft. Even source for military applications can be found also currently in commercial applications. ARINC 429 is a data transfer standard for avionics. It is the technical standard for data bus used on most commercial aircraft and transport. Defines the physical and electrical interface of a two-wire bus and a data protocol of a network of an aircraft.

In addition to the communication cards, the system counts also with a plate of X series, which were used counters channels of 100MHz and digital inputs / outputs 1MHz, a board with 8 RS-485 ports and a card with 64 digital outputs general automation system.

The development of the software that manages the entire test equipment was carried out by DAQSYS using the NI Developer Suite 2012 package, the main tool LabVIEW software. basically two softwares were developed, and a real-time, embedded in the controller PXI, and other user interface (HMI – Human Machine Interface), run on dedicated PC system. Communication between the HMI and the PXI controller is made via an Ethernet Gigabit peer. In this network travels several commands and interface data throughout a performance test, and all programming for implementing the test, sent at the beginning of the same PC for PXI, files with all the data collected during testing, sent from PXI to PC at the end of running test.

Thanks to the flexibility and system expandability, both from the point of view of hardware and software, the developed unit is able to absorb new needs that may arise in the continuity of product development, whether new implementations or changes already implemented features .

For more information about this application or others developed by DAQSYS, contact by phone (47) 3029-0764 or info@daqsys.com.br.

Register and well be Informed !